Life After the Lights

There's a lot to life after the final whistle.

Be smart. That’s a line athletes hear from coaches over and over again. Coaches don’t say it because they think athletes are dumb. They say it because they’re older, and in many cases, wiser. Don’t get me wrong. Some coaches are idiots. But many of them understand the temptation for an athlete to do something stupid and want to do everything they can to make sure players stay out of trouble and eligible. Whatever their motivation, amateur coaches depend on players staying in the game.

Once an athlete crosses into professional status, they’re on their own. Many pro athletes have too much money and time on their hands, but they’re also adults. Sure, some of them weren’t raised correctly and have no understanding of consequences, but we as a society don’t tend to feel as badly for them when they make a mistake. Maybe I’m speaking for myself, but when a pro messes up, I actually hope they get burned. 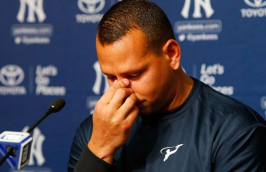 For example, I’m pretty confident I wouldn’t lose any sleep if A-Rod woke up tomorrow without a dime to his name. He’s a disgrace.

I almost wrote this blog last year just after J.T. Barrett was arrested for drunk driving. I remember waking up, hearing the news and thinking to myself, how could he do that to his teammates? He’s one of the best players in the country and everyone is watching him. What was he thinking? The Buckeyes didn’t have a game the week it happened yet all the analysts on Gameday could talk about was J.T.’s arrest. It was awful to watch and fortunately no one was hurt in the process, but it was another mark on athletes in general and an Ohio State program that has a coach with a history of players getting into trouble.

I do have to take a step back and remember everyone makes mistakes. This is not a holier than thou post. I wasn’t an angel in college and many of my teammates weren’t either. We had our share of run-ins with authority and many of the instances could have been much worse than they were. Luckily, nothing “major” ever happened.

Unfortunately, when something major does happen it’s too late to take it back. After an amazing story a couple weeks ago about my Broncos and a surprise from Sly Stallone, another story broke on Saturday about two young men on the WMU football team under arrest for armed robbery. Let me write that again….ARMED ROBBERY! This was the story of two 18-year-old young men breaking into a home and robbing an innocent victim at gunpoint. This wasn’t story about a fight getting out of hand or a story about a player drinking too much. This was a story about multiple felony counts wrapped into one.

When I heard the news, I almost couldn’t believe it. Again, I was thinking to myself, what went wrong here? How could these two young men have made a decision like this to go into a person’s home with a gun and rob her? Why do they have a gun in the first place? I don’t know their background. I have no idea what their socioeconomic status is. We could debate the details for days. What I do know is they were given the opportunity to go to school on a full scholarship, earn a college degree and play a game they loved. They took an amazing opportunity and flushed it in just a few moments on Friday night. Sure, the courts say innocent until proven guilty, but all signs point to guilty in this particular instance. I don’t believe I’m jumping to conclusions here.

Every freshman enters their first camp and has the opportunity to start fresh. I can say this specifically about WMU because I went there and know the people in charge of both athletics and academics. Sure, not every student-athlete is a great student, but every student-athlete on scholarship is offered the same resources as the next. This was their shot to make a way for themselves and they decided to go out after camp broke and rob someone at gunpoint. These two young men went from preparing for the biggest football season of their lives to facing LIFE in prison. A bigger turn of events I couldn’t imagine.

I don’t feel particularly bad for them because they made a choice. They know right from wrong. They messed up and deserve to face the consequences of their actions. I’m heartbroken. I’m sad they threw away an opportunity many others would do anything for. I’m sad they let their teammates, fans and families down. I’m sad two very talented young men didn’t listen to their coaches and do the right thing. I’m sad a young woman had to be put through the terrible ordeal of having her life threatened in her own home. I’m just sad. I hope all involved can learn from this terrible incident and move forward in a positive way.

While at Western, our Coach, Gary Darnell, had many sayings. Some of them stuck and some didn’t. But one that stuck very well was, “Short-term decisions lead to long-term consequences.” If there were ever a situation where the saying was more spot on, I haven’t seen it yet. Those two young men made a very short term decision and the consequences are going to be dire.

I’ll be at the opener this weekend when the Broncos take on Northwestern and I’ll be cheering for the team as I always do. I’ll have my two-year-old with me at a game for the first time. As he grows up, I’ll be sure to tell him what so many coaches and my father always told me, be smart.