Life After the Lights

There's a lot to life after the final whistle.

The irony of Yogi Berra passing away nearly a month before Michigan lost the way they did to Michigan State is almost poetic. The dust has settled now, more games have gone by, but the wounds are still deep. 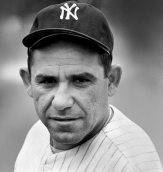 One of the greatest baseball players of all time had a way with words and they were never truer than they were on a cool night in mid-October, 2015.

I love college football more than I can convey in a blog post. I love the time of year. I love College Gameday on ESPN. I love the build up to the big games. I love how it’s on from early morning until late at night every single Saturday. There’s not much I don’t love about college football, less the fact I still have a hard time getting out of bed due to a back injury I sustained while playing it. I can go on for days.

The game teaches us about life in hidden ways, but also in blatant, cold ways. It was like getting hit with a brick when Michigan had the game “won” with 10 seconds left on the clock. All they needed to do was get a routine play off and the game was theirs, but it exploded like the Hindenburg. Suddenly, MSU had a convoy of players in a sea of white running the other way toward the end zone. Everyone watching the event live, or viewing the highlight later, couldn’t believe what they saw. I’ve been around football my entire life and seen a lot of craziness, but I don’t believe I’ve ever seen anything quite like what happened that night. MSU won the game as the clock struck 0:00. Then, it was over, for real.

With 10 seconds to go, my wife, who graduated from MSU and bleeds green, was already in the kitchen cleaning up, disgusted at the performance of her beloved Spartans. She had given up on the game. My brother-in-law (a Michigan die-hard fan) and sister-in-law were getting ready to head back to their place for the night and I, holding onto my son in front of the TV, have to admit, even thought it was over. Then, lightning in a bottle.

Many people have been armchair quarterbacks and second-guessed the decision of the Great Jim Harbaugh not to run another play and possibly get a first down. I’ve seen several of the pundits’ comments; many have never put on a pair of shoulder pads. The fact is that the game wasn’t lost on the final play. It’s just the play everyone will remember for years to come. People have forgotten the punter had an 80-yard punt earlier in the game and gave MSU a long field most of the night. Sure, he made a mistake, but without him, MSU may have been ahead. Who knows? Connor Cook threw for over 300 yards against the best pass defense in the country. It’s a good thing they had a long field all night.

People on Twitter bashing the young man for “losing the game” have major issues and likely don’t know much about what it takes to strap on a helmet. Sure, you never want to leave your destiny in the hands of a kicker or punter, but there’s more to the game than the final play.

Stating the lesson here would be too obvious. Yogi already took care of that. I’ve had many conversations throughout the week and can still hardly believe what happened. The word WOW is representative and the one I’ve seen and heard most. The end of that game is just another example of why I, and so many other people in this country, love college football. It’s more than a game; it’s a reflection of life. Thanks for the reminder, Yogi!